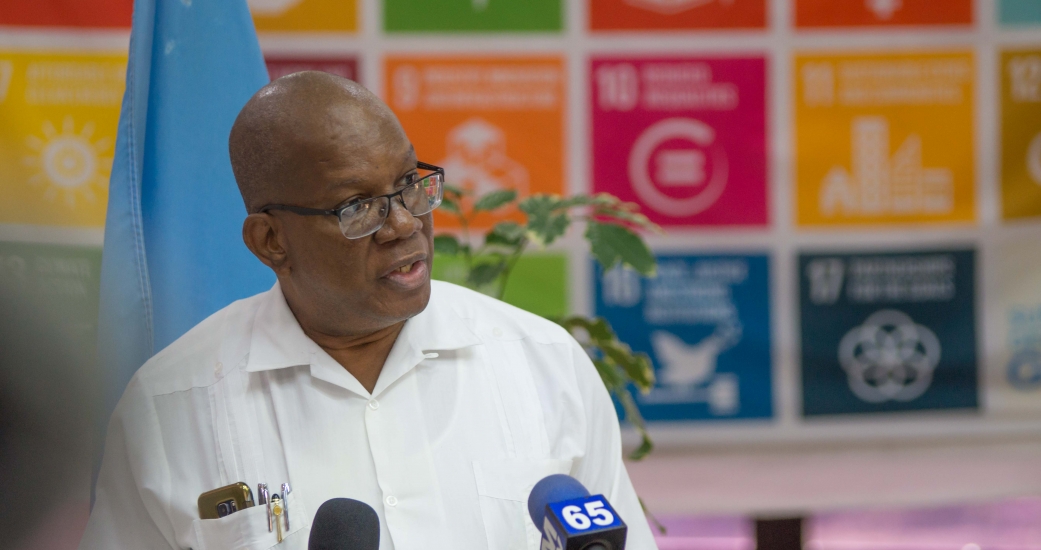 Hon. Winston Jordan Speaking on the occasion of the Launch of the 2016 Caribbean Human Development Report

Speech of the Honourable Winston Jordan, Minister of Finance, on the occasion of the  Launch of the 2016 Caribbean Human Development Report  (HDR), Education Lecture Theatre, University of Guyana, October 19, 2016

Ms. Mikiko Tanaka, Resident Coordinator of the United Nations System and Resident Representative of the United Nations Development Programme; representatives of UN and Other International agencies in Guyana; Ministers of Government; Deputy Vice Chancellor, Dr Barbara Reynolds and Other Staff of the University of Guyana; Members of the Diplomatic Corp; Members of Parliament; Senior Government Officials; Other Invited Guests; Ladies and Gentlemen:

It is my distinct pleasure to deliver these remarks, on the occasion of the launch of the 2016 Caribbean Human Development Report in familiar surroundings. It is on these hallowed grounds that I spent four memorable years pursuing a Bachelor’s degree in Economics. It is on these grounds that I learnt the value of hard work, tenacity and resilience; of cooperation and selflessness; that the value of higher education was not measured by how much you earn but by your service to community and humanity. Later in life, I would go on to learn the values of professionalism and integrity in public life–values which seem to be at a premium these days, but which would be needed if we are to embark upon the multidimensional approach to tackling poverty.

Madam Chairperson, before I embark upon my brief presentation, permit me to make two observations. First, this launch is taking place on the campus of the University of Guyana. I therefore, expected to see the in the audience many University students, especially the young people who are our future. They are the ones who would have to take up from where we leave to ensure that progress to improve human development continues. Their valued presence here today, to listen to the presentations and to interact during the ‘questions and answers’ session, would have been both educational and enriching.

Second, while pursuing my undergraduate degree at this University, I did a course in Development Economics. Part of the required reading was Persistent Poverty by noted Jamaican Professor, George Beckford. The story is told that he was about to give a lecture on poverty at one of the upscale hotels in downtown Kingston, Jamaica. He was so struck by the surroundings that he was moved to question: how can poverty be discussed in such opulence? Now, I am not saying that the University of Guyana is an opulent environment. Far from it! What I am noting however, is that this launch is taking place away from the environs of the people who we are talking about: those in poverty and extreme poverty. So, I would like to urge UNDP to go to the villages, hamlets and remote areas to conduct such launches in future.

Madam Chairperson, as you are  aware,  this very Report was launched in the Caribbean island of Barbados, last month. In September 2015, in New York, the President of the Cooperative Republic of Guyana, His Excellency Brigadier David Granger pledged Guyana’s support for this initiative, during his statement to the United Nations Sustainable Development Summit for the adoption of the 2030 Agenda for Sustainable Development, It is, therefore, now appropriate, for Guyana to further endorse this commitment with the launch of this report.   It is appropriate, too, for us to take this opportunity to discuss the findings of this Report, to ensure that we begin to make the necessary adjustments to both catalyse social and economic development of the region and  consolidate the gains which we have already made under the Millennium Development Goals. These decisive actions must be pursued to make our country and the wider Caribbean region  a better place for us and  future generations. As we strive to build a more inclusive environment for all, we must take into account the multidimensional challenges we face – social, economic and environmental, especially those that are being brought about as a result of the climate change phenomena. In this regard, we recall the recent havoc caused by Hurricane Matthew, which decimated Haiti, a small impoverished country that is, still, recovering from the Earthquake of 2010. Cuba, St Lucia and the Bahamas also were not spared the Hurricane’s fury.  The economic, financial and, most important, human losses suffered by these countries are still being calculated, as I speak.

Madam Chairperson, it must be noted that this current report is the first of its kind with a regional perspective, where governments in the Caribbean are being summoned to work together, to arrive at a workable timetable of activities  for achieving  the 2030 Agenda. The Report rightly points to  the continuous challenges which the region faces. These include, but are not limited to our:

“economic fragility caused by vulnerabilities of the Caribbean states which are prone to natural disasters and have limited scope for economic diversification”. Added to this, is the constant migration of skills from the region. Poverty and unemployment among youth pose serious security risks and threaten the social and economic stability of member states. Further, the lack of adequate social safety nets, inequalities and discrimination also hinders modest achievement of progress.”

All of these obstacles that  hinder growth and development in the region will have to be removed and be replaced by opportunities. The Report offers some solutions  for addressing these problems, including  (a) Protecting the achievements of the last decade, as a result of the foundation laid by the MDG framework,  so as to prevent millions from falling back into poverty; and (b) Comprehensive policies must be  developed and institutionalised to protect populations suffering from discrimination and historical exclusions. In the final analysis, a sustainable economic base is needed, if development is to take place.

Madam Chairperson, as  set forth in the 2030 Agenda, a new collective vision is required to address the region’s overarching priorities, including reducing inequality in all its dimensions, promoting inclusive economic growth through decent work for all, creating sustainable cities, and addressing climate change matters. This approach seeks to reduce transaction costs and provide a common space in the 14 Caricom member states can meet  to plan, discuss issues, share lessons learned, and create synergies.

Above all, the 2030 Agenda is a people-centred approach that places dignity and equality at the centre of its core. Its implementation will require the engagement of all sectors of the State.  This will include all stakeholders, irrespective of whether they are representatives of government, civil society, academic institutions or the private sector. All must be invited to take a seat at the round table and provide leadership and take ownership of this ambitious agenda.

Madam Chairperson, going forward, due to the uniqueness of the Caribbean, some challenges will have to be addressed in a country–specific manner.  For example, Guyana is not affected by hurricanes like its Caribbean neighbours, but is prone to flooding. Other nations, with the exception of Suriname, can collectively establish a Caribbean framework to address Disaster Risk Management/Disaster Risk Reduction (DRM/DRR) to cope with natural disasters which plague them, annually, during the hurricane season.

To build resilience, regional governments should develop Think Tank mechanisms to devise feasible strategies to contain the continuous loss of invaluable human capital. They should discuss ways and means of tackling the housing problem as a means of addressing the SDG 11, which speaks to sustainable cities and communities. In this context, for example, our own  Ministry of Communities is, currently, holding consultations to develop apartment buildings and to facilitate the high demand for housing. Coupled with these measures, the region must establish a food security framework for implementation.

Achieving suvelopment will require significant investment from international private actors. “A significant share of the investments necessary to achieve sustainable development will have to come from private sources, which nonetheless, will depend on the availability of public funds to match those investments, through the provision of guarantees and/or regulations to assure future revenue streams.”

Madam Chairperson, in concluding, I wish to establish that the achievement of the 2030 Agenda would require extensive planning to mainstream the SDGs into local budgets. The exercise would also see the need for a more structured approach to the mobilisation of resources to fund the Agenda.  Given the limited fiscal space in all of our countries,  we will have to redouble efforts to identify and access substantial public and private funds for financing the prescribed development intervention.

Continuous monitoring and evaluation of the programmes and projects within the region that will be inextricably linked to the SDGs should be integrated into the planning horizon. More importantly, the design of the M&E system should take into consideration the various stages of development of the Caribbean nations with a view to providing support where necessary.  This is of primary significance if the slogan, “No one should be left behind”, is to be given real meaning.

Hon. Winston Jordan’s Speech at the 46th Annual Meeting of the Board of Governors of the CDB

Hon. Winston Jordan’s speech at opening session of the National Workshop on Debt Management Self Assessment and Improvement

Remarks of the Hon. Winston Jordan, Minister of Finance, during the launch of the 2016 Human Development Report