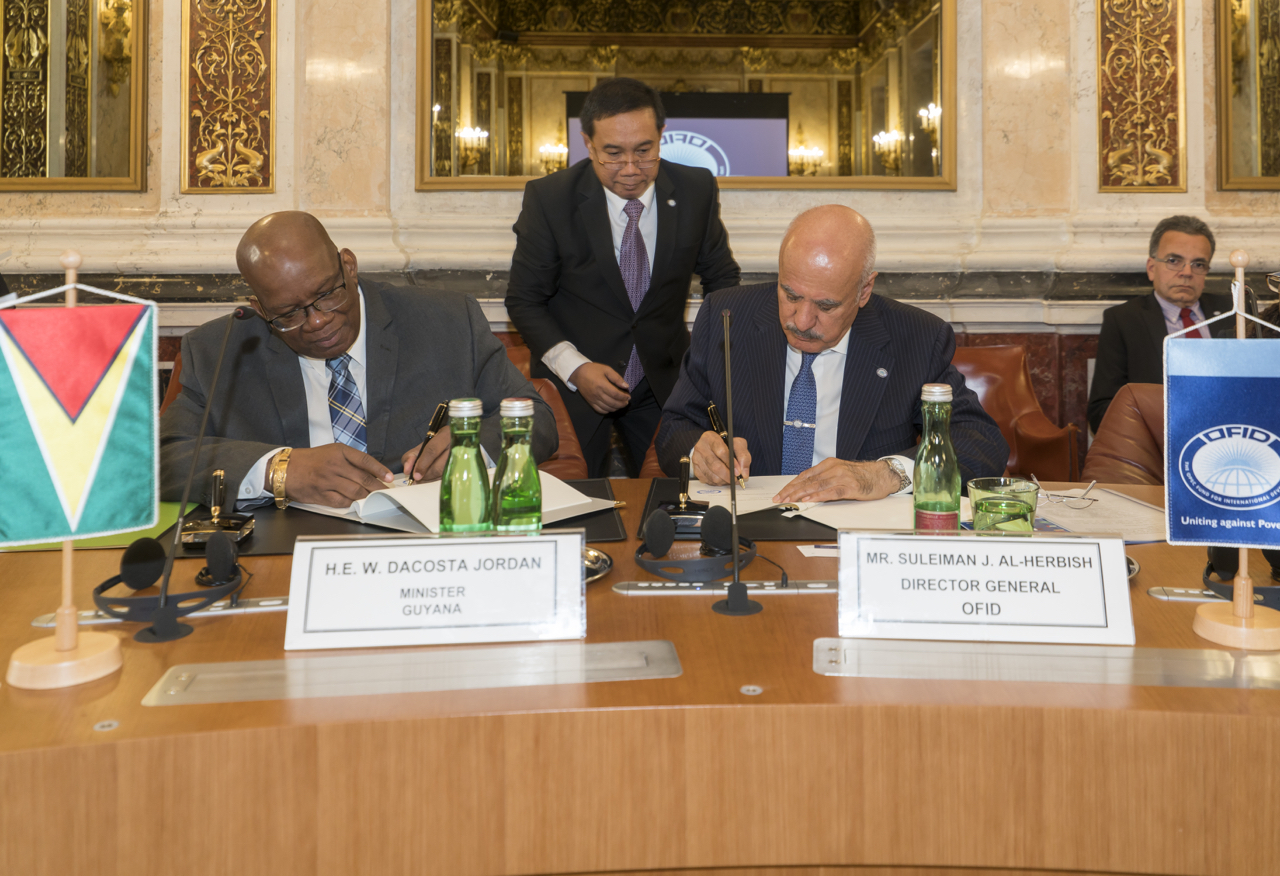 Minister of Finance signs Agreement with OFID; highlights role of the private sector as the creator of wealth

The local Private Sector is set to benefit from new avenues for finance and investments with the signing of the Agreement for Encouragement and Protection of Investment with the OPEC Fund for International Development (OFID).

Minister of Finance, Hon. Winston Jordan on Thursday July 14, 2017 signed the Agreement in Vienna, Austria with OFID Director-General Suleiman J. Al-Herbish. It is the first such agreement with a multilateral partner and sets in train a framework for the start of private sector operations in Guyana.

OFID’s private sector facility supports the private sector in developing countries through loans to micro, small and medium–enterprises, as well as directly to specific projects. As a pre-condition to such private sector investments, OFID requires the signature of a framework agreement with the country concerned for the encouragement and protection of investment. The agreement accords OFID the same privileges as those normally granted to international development institutions.

The signing of this agreement comes at a time when a number of other initiatives are being implemented by Government to help drive private sector growth including the design of a fiscal regime and a fiscal sustainability framework to address the management of natural resources wealth, development of a local content policy and the development of a time-lined work-plan on what the private sector needs to do to prepare for oil and thereafter.

Additionally, building on the wide ranging concessions granted by the previous government, the APNU+AFC Coalition has introduced several legislative and operational changes in support of the manufacturing industry which include the importation of raw materials free of excise tax, waivers on duty and taxes for items that are not listed on the approved list of raw materials once applications are made to the Council for Trade and Economic Development (COTED), initiatives by the GRA to reduce processing time, the introduction of the ‘Trusted Trader Status’ to compliant importers, including manufacturers, the implementation of 1-year tax exemption letters to manufacturers, and the reduction of the corporate tax rate paid by the manufacturing sector from 30% to 27.5%.

More recently, the Government announced the first Round Table Meeting with the GMSA scheduled for July 28th. This Round Table meeting aims for a more structured dialogue and effective engagement with key players in the sector.

OFID is the intergovernmental development finance institution established in 1976 by the Member States of the Organization of the Petroleum Exporting Countries (OPEC) and is bounded in ‘the natural solidarity which unites OPEC countries with other developing countries in their struggle to overcome underdevelopment.’

Resources for the Fund come from voluntary contributions made by members and its various operations.

Between 1976 to present, OFID has committed more than US$55 million to Guyana through its public sector operations. Much of this amount was provided as debt relief—some within the framework of the Enhanced Heavily Indebted Poor Countries Initiative—while more than US$29 million was earmarked for Guyana’s energy, agriculture and financial sectors.

Minister Jordan on outreach to Linden.