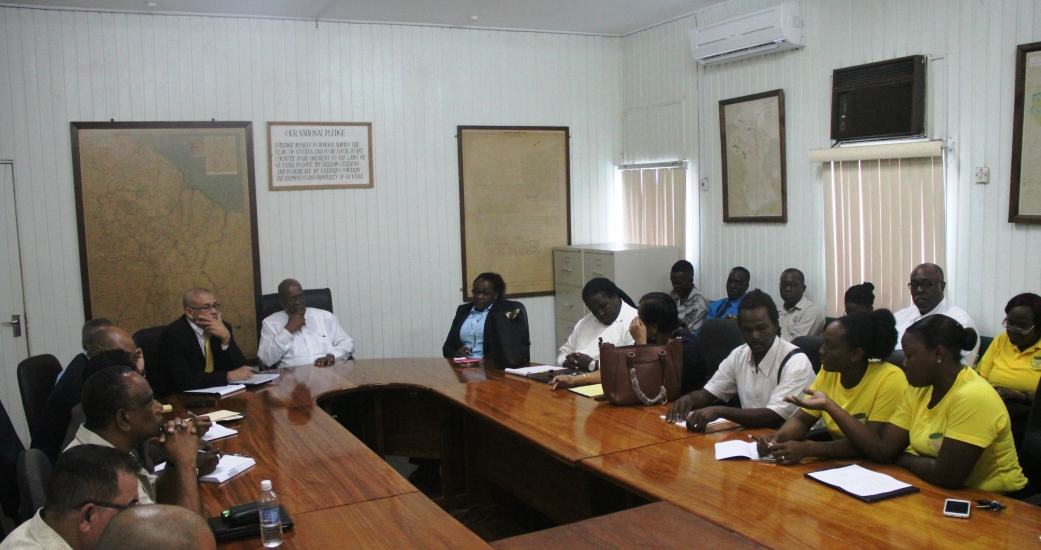 The Minister of Finance Hon. Winston Jordan and the Minister of Natural Resources Hon. Raphael Trotman along with Minister within the Ministry of Natural Resources Hon. Simona Broomes, on Monday, met with representatives of the Guyana Women Miners Association (GWMA), the Guyana Gold and Diamond Miners Association (GGDMA) and, a number of small miners at the Ministry of Finance to discuss the 2017 budgetary measures regarding the mining sector and general issues affecting the miners.

The Ministers were accompanied by Newell Dennison of the Guyana Geology and Mines Commission (GGMC) and Commissioner General of the Guyana Revenue Authority, Godfrey Statia, among other senior officials.

The stakeholders of the industry were keen to discuss the tax measures announced in the recent Budget presentation, which they perceived as ‘over-taxation of the industry’ and their fears that those measures may have a deleterious effect on the industry.

Minister Jordan reiterated Government’s unwavering support for the sector and appreciation of the invaluable contribution of every miner to Guyana’s economy. In doing so, he clarified that the change in the With-holding Tax announced in Budget 2017 is not an additional tax as perceived by the miners, and that, existing concessions are available to all miners once they are tax compliant.

He reminded them too, that the only criterion used by the GRA for the issuance of concessions is compliance.

He added that the Ministries of Finance and Natural Resources and the Guyana Revenue Authority stood ready to provide any assistance that the miners may need to help them improve their knowledge of the taxation system and their accessibility to its benefits.

Further, the following measures were agreed on to improve the relationship among the entities and stakeholders involved:

The Guyana Revenue Authority (GRA) will shortly begin a series of awareness programmes which will specifically target the members of the industry.

The GGDMA and GWMA will collaborate to provide GRA with the Tax Payer Identification Number (TIN) of all miners under their purview. Miners who are found to be compliant will be able to access concessions, while those who are non- compliant will be allowed to enter into an arrangement with the GRA to have their outstanding tax matters settled.

Miners who do not have a TIN will be allowed to file their tax returns using a temporary TIN. A notice will be placed at entry of the GRA stating that “Miners submitting their tax returns will not be refused if they do not have a TIN.’
A help desk will be set up at the Ministry of Natural Resources.
A list of all the roads that are earmarked for repairs within the mining communities is to be made available to the miners who will then suggest others that can be included.
Small Miners were urged to band together so that they can benefit from concessions granted under Investment Development Agreements (IDAs).

The Ministers and the stakeholders pledged continuous consultations and committed to greater collaboration to resolving the challenges encountered by the sector.

Minister of Finance chairs the first Inter-Ministerial Round Table with GMSA.The Round Table is intended to directly address challenges within the sector.