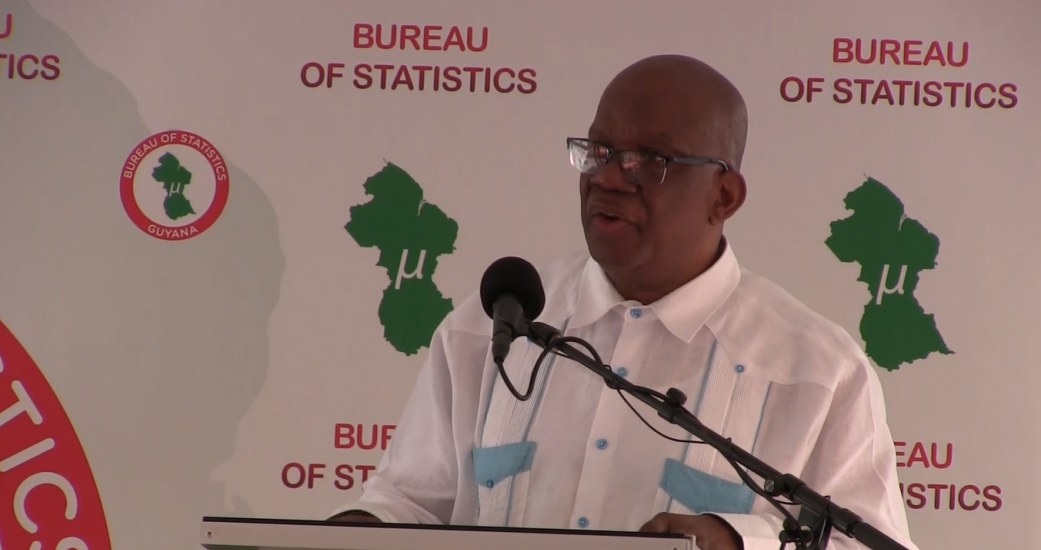 Minister’s Speech at Opening of Bureau of Statistics Building

Speech Delivered by Honourable Winston Jordan, Minister of Finance at the Dedication ceremony of the Bureau of Statistics New Building, April 7, 2017

Your Excellency President David Granger; Chairman of the Proceedings, Board of Directors, Management and Staff of the Bureau of Statistics; Special Invitees, Ladies and Gentlemen:

Today is a Good Day; even a Great Day, perhaps! For it is the day that we have chosen to commission this fully refurbished building – -which previously housed the Customs and Excise Department, as the permanent headquarters of Guyana’s Central Statistical Office, the Bureau of Statistics. In the words of that haunting song by Etta James, ‘At Last’! Finally, after years of being shunted around like a second cousin, after years of living in borrowed and rented premises, the Bureau has been given a permanent home.

As the Chief Statistician earlier pointed out, prior to 1957, data collection, compilation and dissemination were conducted by some government departments.  However, to facilitate more efficient co-ordination of the data process, it was decided, in 1957, to establish a Department of Statistics as a Department of Government with the mandate of collecting data and publishing statistics relating to Guyana’s economic and social sectors.  Progress and development over the next three (3) decades culminated in the Bureau being incorporated, in October 1990, as a semi-autonomous agency, under the Laws of Guyana, to further bolster the independence of statistical management.

Since its establishment, the Bureau, like other related Statistical Agencies in our Region, has played a pivotal role in conducting censuses; collecting, compiling, analysing and publishing socio-economic and other statistical data as well as collaborating with other government agencies in the publication of data derived from administrative sources. However, completing these tasks was not without challenges, as, historically, staff from the Bureau has never been fortunate to be housed at a single location.  As earlier referred to, these less than efficient arrangements came at a managerial and logistical cost. Despite these challenges, the Bureau has continued to strive to deliver its mandate over the years.

You will appreciate, therefore, why my opening sentence was in praise of this day. Undoubtedly this morning’s commissioning Ceremony is a further symbol of Government’s unwavering commitment to ensure that data remain at the heart of policy decision-making within our country. It started with an approach by the Chief statistician, Mr. Lennox Benjamin, to me, as Minister of Finance, with responsibility for the Bureau, soon after the new Government came to Office. He represented to me that the Bureau was spread wide, across three locations; that that did not make for efficient and effective operations; that, as a result, the Bureau was hampered in its ability to execute its functions. He said that he had made numerous representations to previous Administrations – all of which had fallen on deaf ears. Though everyone recognized the importance of the Bureau, this was not reflected in their treatment of the institution. He asked me to put an end to this. In short, it was time that the Bureau had a permanent home.

I, too, shared Mr. Benjamin’s passion and sincerity, as well as his conclusion that the Bureau should have a permanent home now, rather than some time in the future. So, I identified the old Customs building, which was slated for another fire sale under the previous Administration. Luckily, our Government removed it from the chopping block and, after fending off several of my Cabinet colleagues, who had been eyeing the building for one purpose or the other, I won the approval of the Cabinet to utilize the building as the headquarters of the Bureau of Statistics. At this stage, I would like to pay tribute to the former Chief Planning Officer, who is deceased, Mr. Clyde Roopchand, who, initially, spearheaded the project to refurbish the building, which eventually cost in excess of $160 million to complete.

Mr. Chairman, we are all aware of the paucity of data that were made available to the public prior to May 2015. It got so ridiculous that to get simple weather information, it had to be first cleared at the “top”, meaning by the then Office of the President or, perhaps, the Minister of Agriculture, before it could have been released by the responsible agency. Now, this is no more. Information is being made available with increasing quantity and frequency; and its quality has also been improving, though there is a long road still to be travelled. But, overall, the trend has been in the right direction.

As Minister of Finance, in charge of managing this economy, I am perfectly aware that our capability and capacity for conducting good policies largely depends on the quality of available statistics. The performance of the complex economic models, which have developed over the years, and the capability of policymakers to achieve set objectives and tasks depend, more than ever, on the relevance and importance of the information they get on the economy. Hence, statistical data represent a key input in macroeconomic policymaking. They are an indicator for the performance of the economy and a basis for the adoption of current decisions. And, too, they underlie the projections for the future developments. Therefore, their quality, impartiality and timeliness are crucial for the successful functioning of the economy of any country. In addition, the statistical indicators are also a basis for the comparative analyses with the economies of other countries and are essentially relevant for the positioning of the economy worldwide.

As a result of the process of globalization, changes are occurring even more rapidly, creating a greater demand for the foundations to be laid in economic, social and natural resource management.  These requirements place an even greater demand on our statistical agency. So the modernisation and transformation of the Bureau is essential, if we are to meet these development objectives.  I must applaud the Bureau for beginning the transformation process.  Over the next two years, the Bureau plans to deliver the Labour Force Survey (LFS) as well as a Household Budget Survey (HBS).  I should like to place on record the contributions of the Inter-American Development Bank, United Nations Statistical Office, Statistics Canada and the Caribbean Technical Assistance Centre (CARTAC), which are among the organizations that have continued to support the work of the Bureau.

These surveys will certainly provide vital information on employment as well as other key socio-economic data such as consumption and poverty, which will enable our Government to make better economic decisions.  The expansion of the Consumer Price Index (CPI) into an all urban index will also provide important pricing information, especially for the hinterland areas; information that is fundamental in the assessment of changes in the cost of living. The Bureau will also establish a Poverty Unit, in order to make poverty data accessible on a more frequent basis.  These initiatives will certainly enhance the profile of the Bureau, as it aims to become the premier statistical agency within the region.

As Government remains committed to the development of human capacity, in 2017, staff at the Bureau will benefit from training from Statistics Canada, especially in the areas of information technology, data analysis, national accounts, trade and prices.  A module of training in data analysis has already been delivered during the month of March.  Projected training in National Accounts will encompass building capacity for the inclusion of the petroleum sector into our national accounts when commercial production commences. These initiatives will enable staff to acquire the requisite skills needed for the tasks ahead.  Staff will be trained in the use of tablets to collect and process data in the fields as technology will play an important role in enabling the Bureau to produce data that are timely, relevant and of good quality.

Mr. Chairman, before closing, permit to express my deep appreciation for the unblemished, dedicated services of the venerable Chief Statistician, Mr. Lennox Benjamin, whose sterling contribution of an exceptionally high quality in the field of statistics was recognized in 2011 with the award of the country’s third highest honour, the Cacique Crown of Honour, CCH. As he prepares to ride off into the sunset, I hope his heart will remain with the Bureau, and that he would continue to avail himself, as the Bureau goes through a likely difficult transition period.

Mr. Chairman, I look forward to the transformation of the Bureau of Statistics over the next few years, since the Government will continue to look to this entity for the vital socio-economic statistics that it needs for planning.  This building is a symbol of the great things to come from this agency.  Congratulations to the Board of Directors of the Bureau, which, for the first time in its history, is chaired by a woman, Dr. Natasha Gaskin-Peters; Congratulations to Mr. Benjamin and the rest of his team!

Hon. Winston Jordan’s Speech at the 46th Annual Meeting of the Board of Governors of the CDB

Speech by Minister of Finance Hon. Winston Jordan at the PDAC 2018 Annual Convention