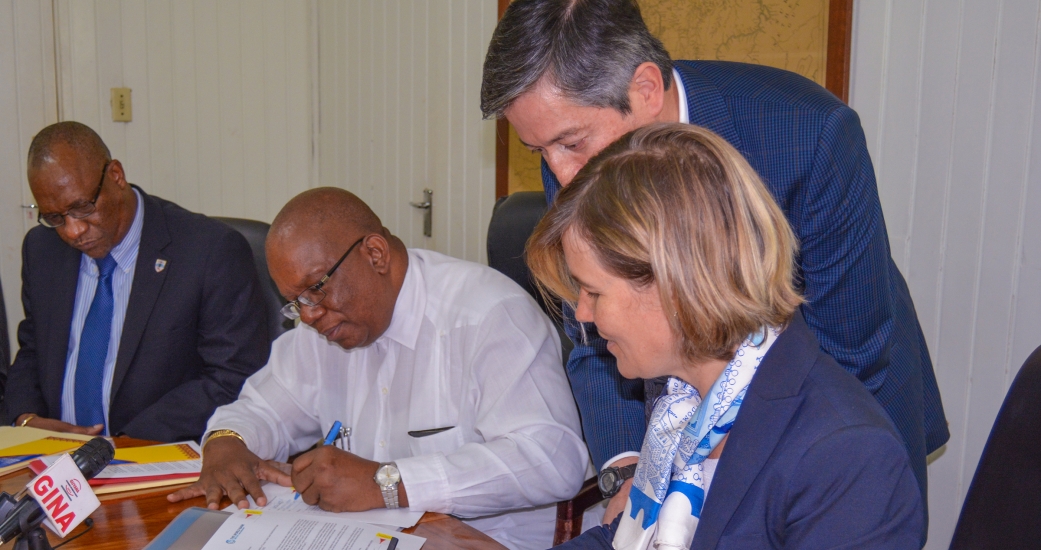 The East Demerara Water Conservancy (EDWC) is to be strengthened through the rehabilitation of the Cunha Canal.

On signing the agreement, Minister Jordan lauded the World Bank for supporting Guyana’s “green economy” transition. He also noted that farmers, commercial and industrial stakeholders on the East Bank, East Coast and Georgetown will soon experience some measure of relief from the financial burden that is often left behind by unexpected floods caused by the vulnerable canal.

He reminded those attending the signing that the event significantly marks one of the tenets of the Green Economy as set out by His Excellency President David Granger and recorded in the inaugural Budget presentation of the APNU + AFC Coalition, that the Government of Guyana will do all it can to reduce environmental risks by putting in place systems to ensure that our waterways are conserved for our livelihoods.

The Cunha Canal does not function at the moment due to years of neglect and hydraulic restrictions that have resulted in dam breaches, overtopping and an overburdened Sarah Johana channel.

Signing on behalf of the World Bank was Sophie Sirtaine, World Bank Country Director for the Caribbean who said, “The rehabilitation of the Cunha Canal will be essential to improve the flood risk management capacity along the flood prone East Demerara Coast. This will also be a critical step in reducing the vulnerability of local farming communities to climate risks.”

Among the works to be carried out under the three year project are the rehabilitation of the drainage channel, upgrade of existing sluices and the construction of a new sluice at the outlet of the Cunha Canal.

Contracts to commence works are expected to be signed before the end of this year. Some twenty three thousand, six hundred (23,600) citizens along the East Bank corridor are expected to see a substantial reduction in flooding by the second rainy season.

This Grant to the Government of Guyana is provided by the Norwegian Government under Guyana’s REDD+ Investment Fund (GRIF) in partnership with the World Bank.

Minister of Finance signs Technical Assistance Agreements with IDB for US 1,762,250.00