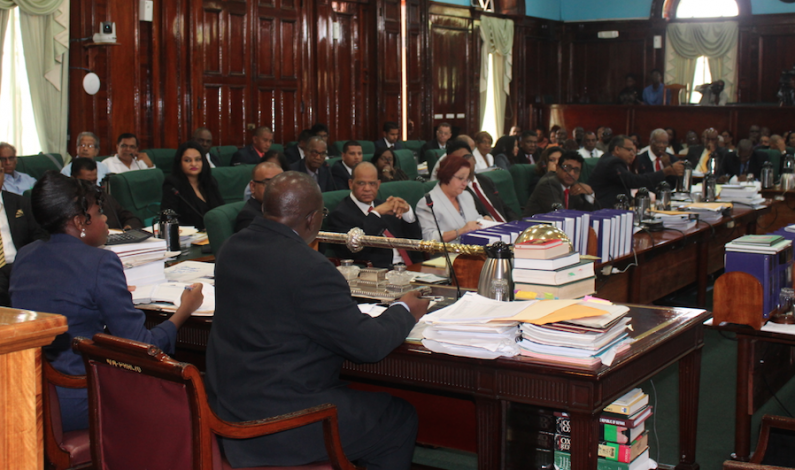 Letter to the Editor (Stabroek News)

The Minister of Finance notes with concern an article carried in Monday’s edition of Stabroek News captioned `PPP complains to Norway over `undermining’ of forest partnership,’ which cites a letter from PPP Member of Parliament Gail Teixeira to Per Fredrik Pharo, Director of Norway’s International Climate and Forest Initiative.

According to the article, Ms. Teixeira, in seeking to defend her party’s farming out of Guyana’s forests during its time in Government, resorts to her familiar formula of faulty arguments in a vain attempt to score cheap political points, hoodwink the Government of Norway and the Guyanese public by misrepresenting the statement made by Minister of Finance Hon. Winston Jordan during his presentation of Budget 2015.

She also accused the APNU + AFC Coalition of “continued lies and attacks on the integrity of the Guyana-Norway partnership on climate change and forests.”

In peddling this accusation, the article states, “She pointed to Trotman’s comments as well as statements by Minister of Finance Winston Jordan in his August 2015 Budget Speech when he said it would be a downright criminal act of deception were we to proceed with Amaila Falls.”

Editor, here is the full quote from the speech, “Mr. Speaker, this Government is well aware of the importance of clean, reliable and affordable energy for development and the improved welfare of our people. As such, we are prepared to explore every avenue to reduce the cost of energy – including examining the Amaila Falls Hydroelectric Project. The problem, Mr. Speaker, is that as currently configured, it would not only be irresponsible, but a downright criminal act of deception, were we to proceed with the Amaila Falls.”

The Minister’s words, in their entirety, clearly convey that the design and approach to the Amaila Falls Hydro Power Project as conceptualized by the previous government have far reaching financial implications that would have to be borne by the nation. These very implications have been ventilated by many analysts, some in this very newspaper!

Further, in disputing the Minister’s statements that the Amaila Falls Hydro Power Project would cost the Guyana Power and Light (GPL) US$2.6B over 20 years, Ms. Teixeira asserts that it will in fact save GPL US$2B over the same period without mentioning the basis for this claim that holds little water (no pun intended) especially given the current environment of depressed fuel prices globally.

During that same presentation, the Minister of Finance made it clear that the identification of Amaila Falls as a potential site for hydropower dates back some 40 years, and that the Government welcomes the diversification of our energy matrix to include clean, sustainable and affordable sources but that it must make financial sense!

He also said, “We know now, that as configured currently, the cost of financing Amaila is too high, and that unless the price tag can be substantially lowered, we cannot proceed. In this opinion, we are strongly supported by the experts at the Inter-American Development Bank, who had considered the project to be too risky to attract the Bank’s financing.”

This position of the government was reiterated in its communication to the Kingdom of Norway in December 2015, during the COP21 Meeting in Paris, and more recently, during the Minister’s rebuttal to wind up the debate on Budget 2016.

In fact, arising from the discussions of the last meeting in Paris, it was agreed that Norway would engage an international consultant for a final review of the Amaila Falls Project.

Ms. Teixeira’s letter while riddled with inaccuracies and omissions is a clear attempt to diminish Guyana’s relationship with Norway and halt the funding received under the Guyana REDD+ Investment Fund (GRIF) and other investments.

In saying that, “The PPP will have no choice but to support Norway putting on hold projects and funds…,” Ms. Teixeira is trying to sabotage the economy now recovering from the machinations and contretemps of her party in the Pre and Post Elections period. Neither she nor her party will succeed in this latest puerile attempt at interrupting the growth trajectory that we have set for the economy.

The APNU+AFC Government continues to value the relationship with the Government and the Kingdom of Norway, and is committed to pursuing a Sustainable and Green development path to the Good Life for All Guyanese.