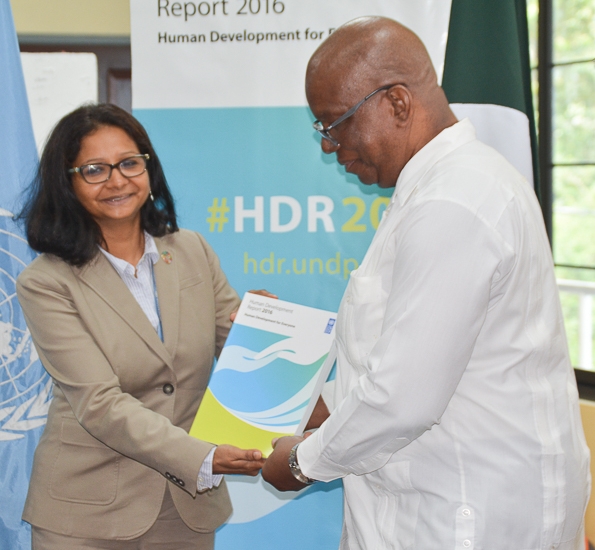 Remarks of the Hon. Winston Jordan, Minister of Finance, during the launch of the 2016 Human Development Report

I am delighted to join you at this public launch of the 2016 Human Development Report on these hallowed grounds of the University of Guyana, Turkeyen campus. It was only recently, October 2016 to be exact, that I gave brief remarks on this very campus on the occasion of the launch of the 2015 Caribbean Human Development Report. I believe that the choice of this venue, yet again, is not coincidental; indeed, it exemplifies a degree of consciousness of the strategic importance and role that the university must play in promoting and sustaining human development.

As we have been reminded, today, this Report was officially launched on March 21, 2017, in Stockholm, Sweden, by Ms. Helen Clark, UNDP’s Administrator. Over the past 25 years, the global arena has witnessed several paradigm shifts in relation to how it views Human Development Reports. I consider it opportune to pause and examine both global and national accomplishments as well as challenges within the context of the theme. This year’s people-centred theme, Human Development for Everyone, reflects the new focus on all inclusive human development, which is expected to place greater emphasis on employment, redistribution of growth and the basic needs of people. This theme resonates with our Government’s priority to achieve a Good Life for All Guyanese – a goal that champions inclusivity and has guided our Administration’s budget preparations and presentations since 2015. I am happy that Mr. Jahan is also a supporter of this view in this 25th edition of the Human Development Report.

The historical series of the human development index, which supports this report, shows that Guyana has made progress since 1990, improving by 17.9 percentage points, consequent upon improvements in life expectancy, mean years of schooling, expected years of schooling and improved Gross National Income (GNI).  In the 2015 Human Development Index, our rank of 0.638 is slightly above the average for all countries of 0.631. Nevertheless, one hundred and twenty-six countries (126) were ranked higher than Guyana while sixty-one (61) fared worse. Thus, while we are trending in the right direction, it is nothing to either shout or write home about. Rather, it is a clarion reminder that we must work harder and smarter to conquer the scourge of poverty. Poverty, wherever it exists, is a stumbling block to progress everywhere in our country. As we strive, collectively, to achieve the Sustainable Development Goals (SDGs) and our own national goals, we must consciously and deliberately allocate resources towards results.

Importantly, we need to measure whether or not we are achieving those intended results, based on evidence; and that evidence must be supported by robust data and the analytical findings that data rich systems provide.  It is only along this path can informed policy formulation and decision making take place. The challenge for us – as the Government, as Parliamentarians, as members of the diplomatic community, and as development partners and leaders – is to step up the quality and frequency of the engagement, both nationally and globally.  Only sustainable interventions will remove individuals and, by design, communities and nations from poverty.

This 2016 Report examines key issues that compromise the achievement of universalism within the existing development paradigm. However, Chapter 5: Transforming Global Institutions does not adequately address the definitional dichotomy that pervades the global community with respect to measuring development. I wish to posit, most ardently, that as much as we recognise the multi-dimensional nature of human development and the all-encompassing character of universalism, it is incumbent on all of us to articulate and advocate with equal fervour, the need to be consistent in defining how we measure development in individual countries. Defining a country’s development level must NOT be solely driven by a one-dimensional formula, that is, the total money earned by the country divided by the total number of persons living in the country.  Economists and development planners have long recognised the archaic and distortive effects of this restricted measure of a country’s development.  However, one would have hoped that by now, the championing by the development family, both partners and countries alike, would have resulted in the acceptance of a multi-dimensional measure to be used by financial and global institutions.

Let me pose the following questions: Should a middle income country, like Guyana, based purely on per capita income and ranked 127 on the 2016 HDI, be considered ineligible for development partner support? Should Guyana be denied continued access to concessional resources because its per capita income has increased, even though significant geographical and other inequalities exist, even as the Government continues to grapple with, for example, an education system that leaves 87 percent of our 11 year olds unable to accomplish the most basic of numeracy skills while another 75 percent is unable to comprehend their own language?  The answer to whether a single dimension indicator should be used is obviously a resounding NO, and we will continue the struggle with like-minded partners to fashion a more-appropriate, all-embracing, universally-accepted measure.

What has this Govt done?

This Administration has from the inception recognised the need to approach national development challenges in a holistic manner.  We have increased allocations to the social sector, particularly health and education. We have undertaken a sweeping tax reform programme; increased real wages, including raising incomes by 38 percent, adjusting the income tax threshold by a minimum 20 percent, increased old age pensions and social assistance. We are passionate in our resolve to bridge the development divide between the coast and the hinterland regions. In that regard, we have begun to improve our road and bridge networks, and our port infrastructure, among other infrastructural developments. We have expanded the role of E-Government, to ensure greater and affordable access to all. Further, and importantly, we have emphasised the development of sectoral strategic plans, monitoring and evaluation frameworks, data development plans, and procurement planning, so as to ensure greater effectiveness in government expenditure allocations for the country.

In the area of governance, we have had local government elections for the first time in over 20 years. This was driven by our desire to empower sub-national governance structures and strengthen community involvement in national decision making. These are seen as critical steps to building a more inclusive and cohesive society.

Today, we continue work on the framework document for a Green State Development Strategy (GSDS), which will ultimately capture the national development thrust until 2030. When completed, it will guide the national planning process.  The GSDS will espouse an inclusive, green and prosperous state, delivering a low carbon footprint and a diversified economy to the benefit of ‘everyone’.

In keeping with the President’s promise, and our Government’s resolve to set the pace, Guyana was the first country in the Caribbean to launch the United Nations Multi-country Sustainable Development Framework and to sign its corresponding Country Implementation Plan, earlier this year.

As we go forward, with the anticipation of new resources on our national horizon from oil and gas, work has advanced towards the preparation of a Sovereign Wealth Fund to ensure that the country’s natural resources are utilised in a responsible and sustainable manner, so that present and future generations can benefit.

The more recent risks of the exchange rate of the SDRs to US dollars when added to the prospects of declining concessional resources would narrow the fiscal space available to our still developing country.  Indeed, it is almost perverse to remove concessional borrowing options, as a country makes small developmental steps, because, in so doing, we risk the nullification or reversal of critical development gains that have been made and compromise the sustainability that could be achieved with longer transition periods.  We must collectively guard against this. Our development partners must be prepared to demonstrate and deliver on commitments made in respect of providing official development assistance. This would help our countries to undertake programmes, consistent with national priorities that can have a decided impact on the poor, vulnerable and marginalised peoples.

Ladies and Gentlemen, let me commend the UNDP for the ongoing work in developing this report over the years; it serves as a useful tool, as well as a reminder, to aid countries in measuring their progress across a range of human development indicators. I should like, also, to commend the UNDP Guyana team, the Office of the UN Resident Representative and the entire UN family here in Guyana, for their continuing efforts to support national development.  Please be assured that our Government regards your role as strategic partner in our national development process as indispensable. I look forward to the future engagements, including those which will be guided by this report.

I also agree that human development for everyone is attainable.  But … yes there is a but … only if we, collectively, ensure that our work programmes reflect the multi-dimensional nature of development and poverty – so that we address development in a holistic, coordinated manner. This flagship report is a significant advancement in the measure of progress of our country.  We must be led by national needs, balanced with global responsibilities. Every man, woman and child, no matter where they may be in their life cycle, must be able to enjoy a good quality of life.  I urge our development partners to honour the global pledges made to developing countries, even as we strive to achieve the 17 Sustainable Development Goals. If we ALL act and deliver on our commitments, as Government, as development partners, as private sector and civil society, then we will create a nation where no one is left behind, true inclusive development prevails, and the “Good Life” is experienced by ALL.

Remarks delivered by the Hon. Winston Jordan, Minister of Finance, at the Opening of the Student Loan Agency Building, University of Guyana