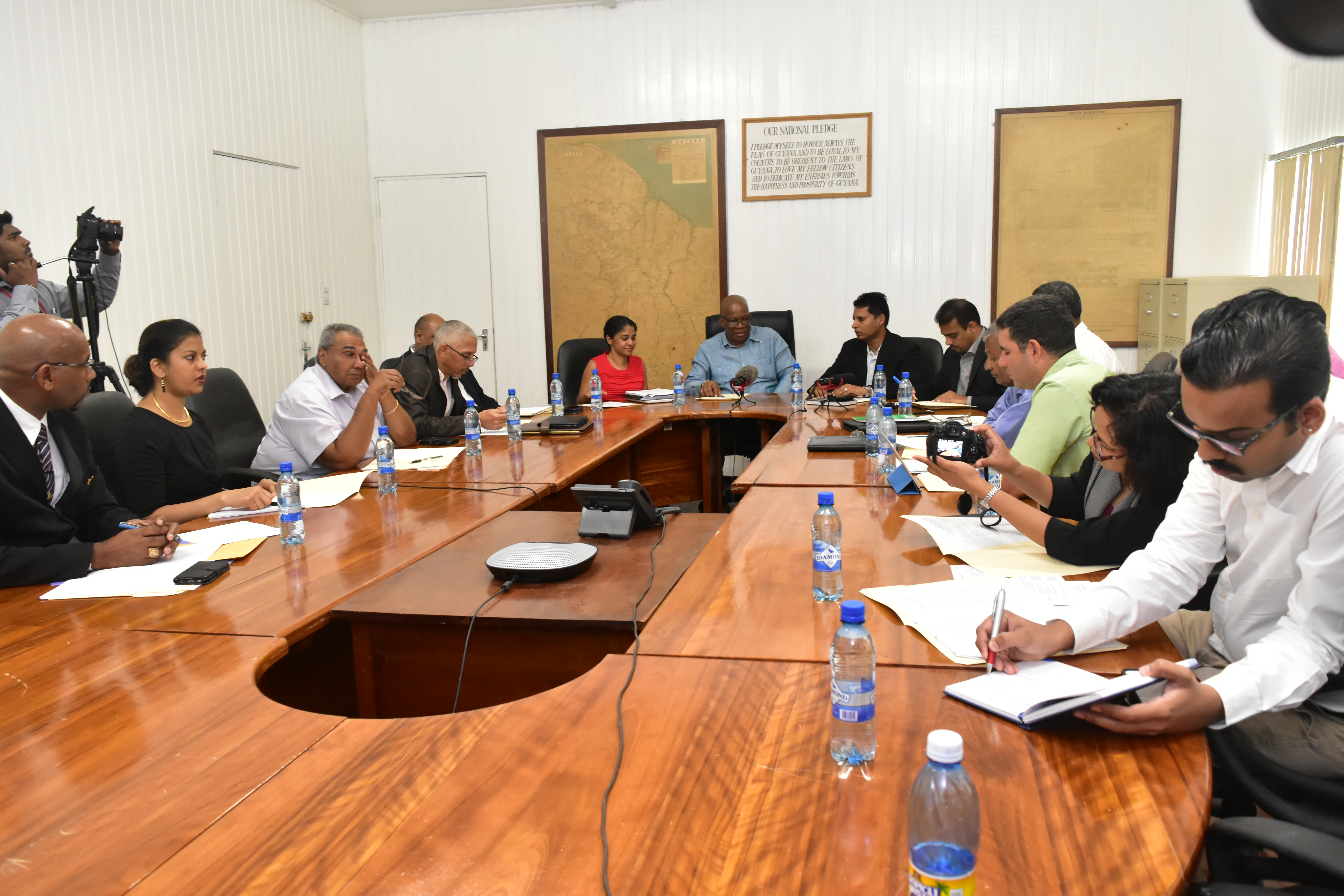 Minister of Finance chairs the first Inter-Ministerial Round Table with GMSA.The Round Table is intended to directly address challenges within the sector.

The First Inter – Ministerial Round Table with the Guyana Manufacturing Services and Association (GMSA) was held on Friday at the Ministry of Finance. This initiative forms part of Government’s coordinated efforts to support the development of the manufacturing and services sectors by engaging the private sector and was born out of a proposal for its formation by the Minister of Finance, Hon. Winston Jordan during his feature address at the recently held GMSA Dinner.

The proposal was accepted by the GMSA then sent to Cabinet where it was endorsed, and an Inter-Ministerial team comprising the Ministers of Finance, Natural Resources, Business and Public Infrastructure, supported by relevant senior technical officers was approved.

The Round Table was chaired by the Minister of Finance and attended by a seven member team from the GMSA led by President Shyam Nokta, Minister of Natural Resources, Hon. Raphael Trotman, Minister of Business, Hon. Dominic Gaskin, Minister of Public Infrastructure, Hon. David Patterson, Director of Budget, Sonya Roopnauth and Head of Projects, Tarachand Balgobin of the Ministry of Finance and representatives of the Guyana Revenue Authority.

The GMSA presented an elaborate range of issues facing the sectors and highlighted  as most critical, the impact of VAT on manufacturing inputs, equipment and products; the impact of imported substitutes and the need for supporting mechanisms; the UK Environment Agency Greenheart Restriction; and fiscal supporting mechanisms.  The Government Ministers expanded the discussion to include marketing and quality assurance, integrated land use planning, training and capacity building, forest inventory, ecosystem services, certification and the utilisation of wood waste as part of introducing renewable energy technologies.

The meeting agreed that immediate solutions would focus on measures to address the competitiveness of known and lesser known species, clarifications on investment agreements and greater information sharing, road maintenance in light of heavy dual usage of roads, a review of  the applications for VAT, the creation of a consolidated dimensions stockyard and the establishment of a revolving fund which will allow stakeholders to modernise and retool their production processes and refurbish aging capital stock.

Additionally, Government committed to re-examining the impact of imported substitutes on the competitiveness and viability of the local market by relooking at existing tariffs and concessions.

A first follow up meeting to the first Roundtable is scheduled to be held on August 7, to discuss the issues related to the impact of VAT on the sector’s competitiveness.

The Inter- Ministerial Round Table will be held thrice annually.