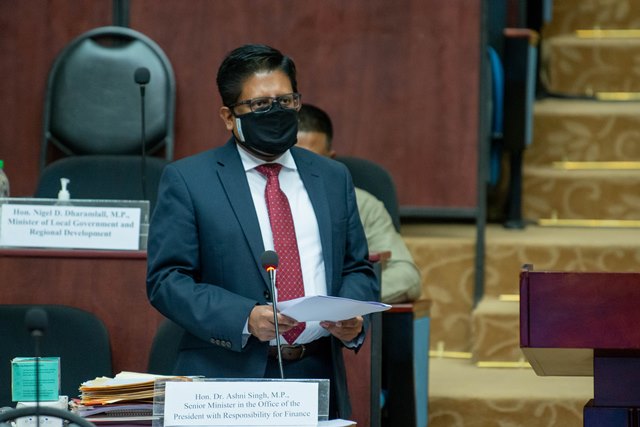 Over $23B Supplementary funding secured for flood relief, vaccines, other emergency interventions including in security, agriculture sectors.

Georgetown, Ministry of Finance, June 14, 2021: Supplementary allocations to address the recent major flooding in several Regions as well as for emergency interventions in key sectors including
Agriculture, Health, Housing and Water, Public Works and Security have been secured with Senior Minister in the Office of the President with Responsibility for Finance, Dr. Ashni Singh successfully piloting the Supplementary Appropriation Act in the National Assembly after which it was meticulously scrutinized and debated with the Opposition A Partnership for National Unity/Alliance for Change (APNU/AFC) posing a number of questions before the Motion was finally passed late Monday night.

The Supplementary Appropriation Act approved comprised Financial Paper 1 of 2021 totalling $1.9 B to cover for the period April 1-June 8 which provides for drugs and medical supplies and air, water and land transport and Financial Paper No.2 of 2021 totalling $21. 3 B for works in various sectors including for the Demerara Harbour Bridge and for the rehabilitation of public and access roads. Additionally, funds were approved for the purchase of COVID 19 vaccines and expansion of health facilities and infrastructural works in new and existing housing areas.

Commenting recently on the flood situation in many Regions due to a lengthy heavy rainfall period, Minister Singh said that despite providing an immediate response to the countrywide crisis, more funding was urgent to address the situation and to fix damages in the aftermath. He had indicated that deployment of additional equipment including pumps to get water off the land would have taken place and this action would need to be sustained by Government for the period that the rains continue. He added that the provision of relief for citizens directly affected would need to be sustained as well with there being no access to food, markets and cleaning supplies for thousands.

The Finance Minister had reminded too that several dams, bridges and roads would have been washed away as a result of the flood while some would have been battered by the persistent rainfall
and therefore, additional costs to the country would have been incurred. These, coupled with Government’s continued fight against the dreaded and ongoing COVID-19 pandemic, would have necessitated additional vaccines, thus the Supplementary Provisions.