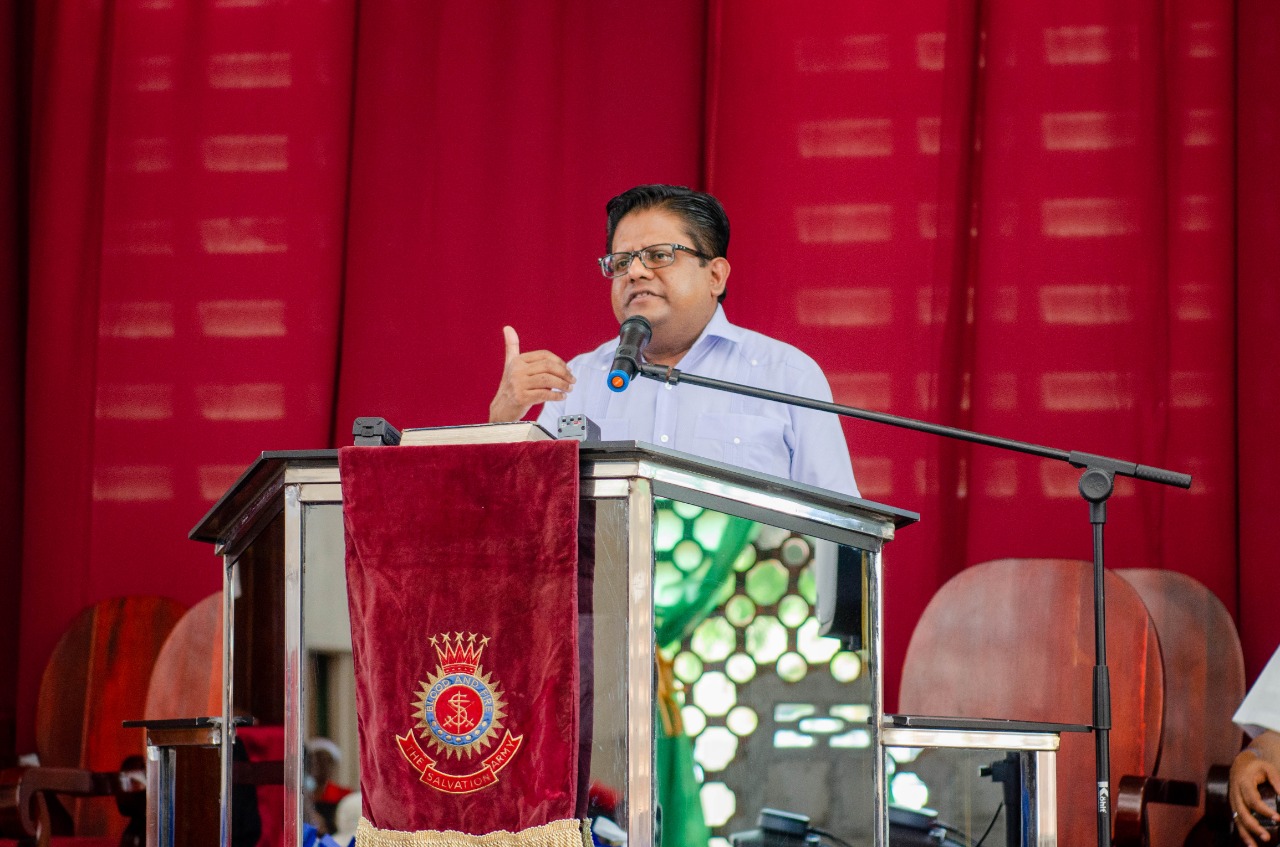 Georgetown, Ministry of Finance, December 19, 2022: Senior Finance Minister Dr. Ashni Singh told those gathered at the Salvation Army today that Government intends to continue working towards improving the lives of all Guyanese as it forges ahead with building a modern Guyana. He was at the time delivering the feature address at the Salvation Army’s (Guyana Division) Christmas Hamper Distribution on Alexander Street, Georgetown, where many in need gathered to collect hampers and to sing Christmas Carols as they enjoyed the season of goodwill.

The Minister highlighted Government’s several initiatives to improve the quality of life of pensioners which include a nearly 40 percent increase in Old Age Pension since the PPP/C returned to office, as well as investment in public health care such as six Regional Hospitals and various telemedicine centres in hinterland Regions across the country. Dr. Singh reminded the gathering (amidst concerns raised that some persons were having difficulties with their pension) that he has been spearheading National Insurance Scheme (NIS) outreaches across the country in several Regions to deal with the various matters. The minister noted that this initiative will continue and that Government is committed to resolving all of the problems.

Dr. Singh alluded to President Ali One Guyana initiative which he noted has a deeper meaning to include each citizen of every religion and from every location in the country whereby they must be included in Guyana development and must benefit from the country’s resources.

The Minister praised the Salvation Army for its excellent work and initiatives over the years, including its programme to help rehabilitate persons suffering from drug and alcohol addiction which has helped hundreds who were ‘brought back from the brink of addiction’.

Also present and delivering remarks at the event was Advisory Board Chairman Mr. Edward Boyer who expressed gratitude to the PPP/C Government for its significant support over the years. 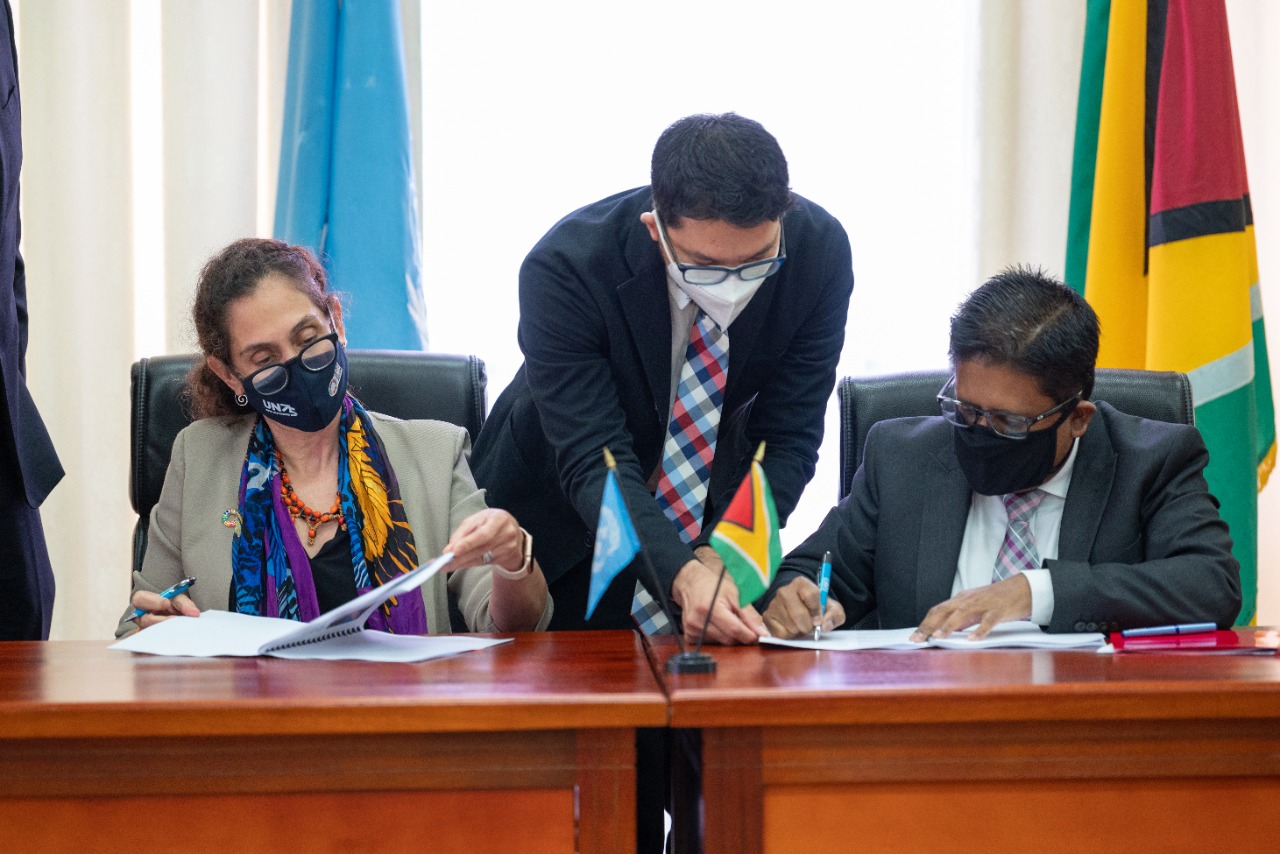 The MSDCF is the primary instrument for planning and implementation of the UN development activities delivered by over 20 UN agencies, funds, and programs towards the fulfilment of the 2030 Agenda in the participating countries, including Guyana. It was developed in consultation with governments, regional organizations, the private sector, development partners, civil society organizations, and other stakeholders.

At the signing, Hon. Dr. Ashni Singh, Senior Minister in the Office of the President with responsibility for Finance, reaffirmed government’s commitment to the advancement of Agenda 2030 and the attainment of the Sustainable Development Goals (SDGs). He then highlighted that the UN MSDCF Agreement’s pillars are in alignment with government’s principles and added that this was an indication of its strong commitment to the established global principles.

On referring to Pillar 2 that speaks to the issue of “building resilience to climate-induced and natural hazards”, Minister Singh said that Guyana is part of a tiny minority of countries where the majority wake up every morning below sea-level. He explained that this situation causes the country to expend extraordinary amounts of fiscal resources to construct a physical defence against rising sea levels. Meanwhile, Dr. Singh said that successive generations of Guyanese have recognized the perils associated with cutting down their forest and kept it intact. He cautioned that domestic action alone will not suffice to contain the scourge of continued rising sea levels and added that the fight against climate change is a good illustration of the importance of multilateralism and global action.

The Minister further stated that government remains strongly committed to the sustainable management of natural resources while at the same time, intends to address the very pressing development imperative that the country faces. He stated that on the regional agenda, a subject that is closely related was that of agriculture and food security and noted that on this government’s return to office in 2020, the administration set about renewing its advocacy on the importance of agriculture and food security, not only globally, but in the region and in Guyana. Minister Singh mentioned that President Ali was asked to resume the portfolio responsibility for agriculture, a position previously held by Guyana. He emphasized that agriculture is an extremely important part of Guyana’s economic diversification strategy in which the country has already started to promote an aggressive agenda, with large scale food production, and has also begun to advance its agro processing and business agenda to unlock some of the persistent barriers to intraregional trade in agricultural output.

Minister Singh reaffirmed that Guyana continues to value partnerships and relations with the UN and looks forward to the translation of the development co-operation framework into national action plans for the process of implementation.

Also present at the signing ceremony was Minister of Parliamentary Affairs and Governance, Honourable Gail Teixeira, who recalled that this government struggled to achieve democracy in 1992 and 2020. She further explained that with the help of global partnerships this administration was able to overcome the obstacles. For this reason, she therefore emphasized the role of global partnerships in the preservation of democracy and its important link to development.

Meanwhile, the Honourable, Hugh Todd, Minister of Foreign Affairs and International Cooperation endorsed Guyana’s commitment to multilateralism and its support for global governance. He noted that inking of the agreement is a demonstration of our collective efforts towards the attainment of a better global environment.

The UN Resident Coordinator, Ms. Yeşim Oruç stated that “this important partnership agreement between the UN and the Government of Guyana reinforces our shared commitment to the achievement of the Global Goals and to mobilize the UN to accompany Guyana’s remarkable development trajectory.”

“Across all the areas of sustainable development, ‘People’, ‘Prosperity’, ‘Planet’ and ‘Peace’, there is great momentum in Guyana. We also know that there is much to be done for Guyana to reach its own national development ambitions. This framework agreement will guide the UN in our efforts to be an ever more responsive partner to Guyana. I am delighted to be signing this cooperation framework today on Human Rights Day and on behalf of the UN agencies, funds, and programs operating in Guyana. My UN Country Team colleagues and I look forward to working with you and the people of Guyana in delivering on this partnership through a range of country programs starting in 2022,” added Ms. Oruç.