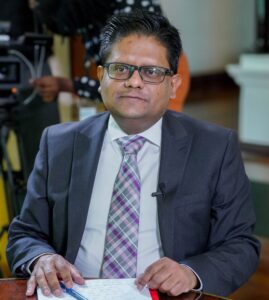 The country’s financial situation when President Irfaan Ali was sworn into office on August 2, 2020 was found to be in a disastrous state, according to Senior Minister responsible for Finance in the Office of the President, Dr. Ashni Singh. The Minister today explained this during his first interview with the Department of Public Information as he addressed a number of matters pertaining to the state of Guyana’s economy and what Government has been doing to bring the country out of the state of depression it was under not so recently.

The economy went through an extremely challenging period over the last five years and this has manifested itself in a number of areas, including very modest, sluggish growth. At a time when oil production was imminent, we should have seen much more rapid growth given all of the investments that have been coming on stream in preparation for oil production, he noted.

The Minister pointed out that what instead happened was catastrophic, to put it mildly, in terms of economic performance especially in the last two years.

“A large part of this was due to the political environment…for the last 2 years the country was in a situation where a No-Confidence Motion (NCM) had been passed in December, 2018 but was not being respected with the constitutionally stipulated election that should have come within three months of an NCM and that effectively created a political environment that was severely harmful,” he said adding that there was limited economic activity with both investor and consumer confidence drying up. Minister Singh lamented that things got even worse during the period between March 2 to August when the political environment deteriorated even more dramatically bringing the economy to an effective stand-still.

The Finance Minister then pointed to the state of public finances which according to him were ‘nothing short of disastrous’ as he specified the excessive taxation placed on the backs of the private sector and citizens, pointing out that government collected revenues totaling G$992 billion between the period 2015-2019. Despite this huge revenue collection, the then Government utilized these funds in an unproductive manner through wasteful and inefficient government expenditure with total government spending amounting to G$1.2 trillion Guyana dollars. After accounting for grants received, the aggregate fiscal deficit of the central government amounted to G$130 billion over the five year period. On the subject of external debt, the Minister pointed out that the previous government had contracted new external debt of US$400 million during their five years in office. On domestic financing, Minister Singh pointed out that when the PPP/C demitted office in 2015, Government had left a net deposit at the Central Bank of G$16 billion. After five years of economic mismanagement by the previous Government, the new Government is now burdened with a net overdraft of G$93 billion at the Central Bank. He added that if this overdraft is counted as domestic debt, this would result in an effective breach of the domestic debt ceiling.

Concluding the details of the disastrous situation which is now being attended to by the current administration, Minister Singh pointed out that the overdraft at the Central Bank was highlighted by the International Monetary Fund (IMF), “the IMF does annual reviews of our economy as they do with every other economy around the world and… on at least two occasions the IMF drew attention to the overdraft that was accumulating at the Central Bank, flagged it as an issue of concern, and called on the Government to take corrective action to resolve this matter. That action was not taken for whatever reason and now remains to be resolved’.