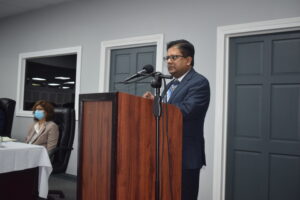 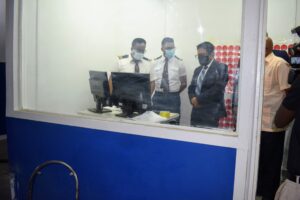 Senior Minister in the Office of the President with responsibility for Finance, Dr. Ashni Singh today made his first visit as Finance Minister during his current tenure to the Guyana Revenue Authority (GRA) Headquarters and the various GRA facilities at respective wharves in Georgetown. The visit occurred amidst the busy Christmas and year-end clearance process and enabled the Minister to inspect the operations at the respective facilities. It also allowed for the Minister to meet with GRA Department Heads to outline his Government’s key priorities including increased efficiency and a high level of integrity.

During his visit to the Headquarters on Camp Street, the Senior Finance Minister, who was accompanied by newly-appointed Chairman of the GRA Board, Mr. Saisnarine Kowlessar, met with Commissioner-General Mr. Godfrey Statia and toured the various offices in the compound. After congratulating the new board members on their appointment and wishing them well in the discharge of their responsibilities, the Minister said, “GRA should aim to be a world-class tax administration,” as he addressed Senior Management gathered in the Oil and Gas Unit. He added, “It is opportune that we are meeting in the room of the oil and gas unit, as particularly where we are as a country, we are at a critical juncture, a defining moment, the moment that our country is really going to turn the corner from a country where there were a number of fiscal challenges to one which is now an oil producer and exporter with different challenges including the need to manage our finances carefully and sustainably.” On this note the Minister reminded GRA that despite the importance of revenue from oil and gas, domestic revenue mobilization was still a priority.

The coming into existence of an oil and gas sector does not mean that revenue collection from other sectors will not matter. In fact, it will be quite the opposite, he said as he alluded to other non-oil sectors which his Government will be prioritizing as well.

Pointing to the modernization of infrastructure taking place in the country, the Finance Minister noted that this must be accompanied by rapid modernization in the manner in which Government services are delivered to taxpayers. He further emphasized on GRA’s role in trade facilitation and the need for the rapid deployment of electronic tax-payer services along with delivery of services in a client-friendly manner. Turning his attention to corruption, Minister Singh then reaffirmed his Government’s zero tolerance stance on this as he cautioned that anyone found to be part of corruption would be dealt with condignly.

Wrapping up his visits, the Minister inspected the GRA’s operations at the various wharves including those at the Guyana National Industrial Company’s (GNIC) wharf and the GRA’s Container Scanner Unit.